Isn’t it annoying when you’re in an argument or discussion with someone, they say something you know isn’t right, but you can’t quite put your finger on what it is?

Sometimes logical fallacies are easy spot, sometimes not so easy, especially if you’ve never been taught what to look out for.

In this article I’m going to share with you seven logical fallacies that you’ve probably never heard of, but you definitely should know about:

Don’t you hate it when you complain about something that genuinely sucks, only to have someone else dismiss your valid complaint by comparing it to even worse problems in the world?

You: “This food is disgusting!”

Her: “There are millions of starving children in the world with nothing to eat at all!”

This is the fallacy of appealing to worse problems (aka “not as bad as” or “relative privation”) and it occurs when someone tries to make a situation appear better or worse by comparing it to the best or worst case scenario.

Whether or not there are millions of starving children or not, that has nothing to do with whether or not your food is disgusting, burnt or has a hair in it.

Him: “There are millions of homeless people around the world that would love to have a job!”

Regardless of how many homeless people there are, that has nothing to do with whether $4 an hour is a shit wage or not.

Just because your situation isn’t as bad as others, or isn’t the worst case scenario, that doesn’t mean you don’t have valid grounds for complaint, or that you’re not making a valid argument.

When someone dismisses a complaint as “first world problems” that often falls under this fallacy. 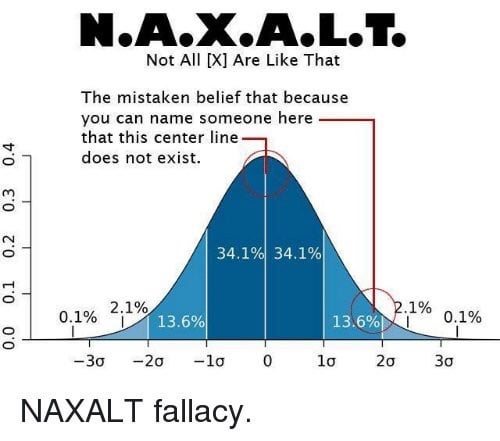 Have you ever made a statement which is obviously true in your experience, and then someone else tries to casually dismiss it simply because there are exceptions to the rule?

You: “Men are stronger than women”

Her: “Not ALL men are stronger than women”

Just because there are exceptions to the rule, that doesn’t mean that a statement isn’t true for the most part, or that there aren’t generalities or trends that exist in groups, or that no possible conclusions can be drawn about a certain culture, gender, race, city, country etc.

Exceptions and outliers may exist, but they’re not the norm, and people shouldn’t have to preface everything they say with “generally speaking” etc.

To say that you can’t make any generalized claims about any group because exceptions and outliers exist is stupid.

PS: Travelling the world I’ve learnt that stereotypes exist for a reason, and it isn’t for no reason that people think and say the things they do.

Tu quoque (aka “appeal to hypocrisy”)

“If everyone is guilty of something, is no one guilty of anything?” – Merriam-Webster

Tu quoque (aka “appeal to hypocrisy”) is when someone tries to divert attention away from one subject, by pointing the finger at someone or something else.

You: “Donald Trump is a liar! He’s lied thousands of times!”

Her: “What about all the lies that Hillary Clinton told!”

Whether or not Hillary Clinton has told more, less, or the exact same amount of lies as Trump, has nothing to do with whether or not Trump is a liar. Comments like these are just an attempt to change the subject and deflect attention away from the topic at hand.

You: “There are over 14, 000 gun homicides in America each year… school shootings continue… something has to be done about the gun laws…”

Him: “What about the thousands of knife attacks in London!”

Whether a claim is hypocritical or not, or the other person or party is guilty or not, says nothing about whether a particular claim or statement is valid or not.

Argument to moderation (aka “balance fallacy” or “middle ground fallacy”)

The argument to moderation fallacy makes the mistake of assuming that the truth is to be found between two extremes. But this is obviously not true.

Person A: Everyone should be allowed slaves!

Person B: No one should be allowed slaves!

Person C: Ok, some people should be allowed slaves…

“There are two sides to every story and the truth is often somewhere in between.”

However in an argument one side may be 100% right, the other side 100% wrong, or neither side could be even remotely right about what they believe. Both sides could be completely wrong and delusional.

Don’t just assume that the truth is to necessarily be found somewhere in the middle, or that both sides have valid arguments.

The truth isn’t to be found by taking the middle ground between two extremes, or in arguments between people.

You also need to be aware of people appealing to false authorities in order to persuade you.

Often advertisers, the media or a talk show will present someone as an authority or expert, however sometimes the person being quoted:

A large percentage of the public are strongly influenced by whatever celebrities tell them, and that’s why advertisers and the media use celebrities to promote certain products or services, ideologies or political candidates, as if these actors, celebrities, rappers etc. were experts or valid authorities on anything.

A common fallacy used by Christians, Muslims and other religious people to defend against the bad behavior of people in their religion is the No True Scotsman fallacy.

Person A: “Islam is a religion of peace”

Person B: “If that’s true, then what about 9/11, the November 2015 Paris attacks, the Orlando nightclub shooting and all of the killing, raping, violence and terrorism going on in the world today from Muslims in Al-Qaeda, Boko Haram, ISIS etc. in the name of Allah?”

Person A: “Those people weren’t true Muslims…. A true Muslim would never do that…”

The problem with this statement is that it implies that it is impossible for a Muslim, Christian, Hindu etc. to ever commit a crime, to do something evil, or to say, do or believe a certain thing.

However, life experience tells us that is just not true.

If you like this article check out: How to get Smarter: A guide to critical thinking, cognitive biases, and logical fallacies

Related Topics:featured
Up Next

How to get smarter (& avoid being a dumbass)

21 tips to improve your critical thinking

25 Signs of a Covert Passive-Aggressive Narcissist

33 Ways People try to Manipulate You

How to get Smarter: A guide to critical thinking, cognitive biases, and logical fallacies

9 Philosophical razors you need to know